The loop is the highlight of every roller coaster ride. Pure thrills when you go headlong into the depths, an unforgettable feeling. Also the artwork “The Loop” in the entrance area of the Tollwood Festival is supposed to be remembered, but not for the thrill, but as motivation for more thoughtfulness. The British artist Adam Stubley, who lives on Lake Ammer and has been artistically associated with Tollwood for years, has constructed this 7-metre-high loop from 200 shopping carts as a pictorial implementation of the motto “Reicht leicht!”. “The Loop” is a striking symbol of consumerism in our throw-away society. 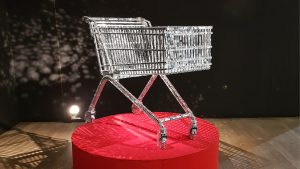 (Temple of consumption) Torsten Mühlbach was born in 1974 in Torgau, Saxony, and graduated from the Munich Art Academy under Professor Nikolaus Gerhart. As the venue for the summer festival, he designed a five-meter-high consumer temple in the middle of the grounds. Inside it, an altar dedicated to the god of consumption shines: Built and decorated with goods of daily use that stand for short-lived, nonsensical consumption. At the same time, the altar also shows the dark sides of consumption such as environmental destruction, child labour and the exploitation of resources.

At the foot of the Olympic mountain, opposite the main entrance, a wheel of life is created, based on a supporting symbol of Buddhist meditation: Buddha is said to have seen in this wheel the eternal cycle of life. Tollwood’s wheel of life is also a symbol of a cycle, but not of life, but of the earth-threatening cycle of senseless consumption: this wheel of life consists of a tableau of consumer articles, from aluminium cans to coffee-to-go cups to mobile phones. A work of art that is as colourful as it is admonishing. 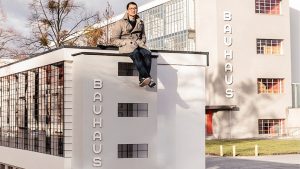 Explosion of real estate prices, dramatic lack of land, conversion of rental apartments into expensive condominiums, these are very Munich typical buzzwords. The German-Laotian architect Van Bo Le-Mentzel counteracts this with his residential concepts. His Tiny Houses show: You can live on 15 square meters, with everything you need. The “Wohnmaschine” shines in the ambience of Bauhaus architecture. This “Tiny House” is living space, a place for reflection and discussion.

The Austrian artist Ludwig Frank commutes between the creative worlds of Korea and Europe. The gate in the entrance area, inspired by Asian architecture, grew out of this field of tension as a symbol of openness and confidence. 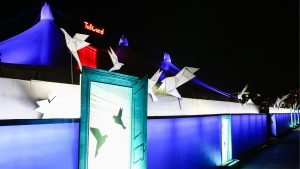 The artist and stage designer Andrey von Schlippe designed the fence at the Winter Festival. He picks up parts of the motif again: Birds that swing from the fence into the sky and carry stories about everyday heroes into the world.

Artemisia – that is her artist name. Her large 3D pictures have become the epitome of exciting street art. On Tollwood, the street and scenery painter embellishes the grounds, from the ticket booth to the tent sign.